I wrote this piece for the November edition of THE ADDRESS magazine, a digital ‘coffee table’ publication for luxury real estate, food and travel. Read the original article.

Glorious Gansu – at the centre of it all

The province of Gansu may geographically be considered the centre of China, but culturally and historically the Chinese have long regarded it as marking the outer limit of ancient Chinese cultural influence.

Gansu is an ancient gateway into China, standing between the Tibetan mountains to the southwest and the vast, inhospitable Gobi Desert to the north. It is in this northern half, amid the sand, that the Great Wall, long a historic symbol of a unified China, ends at the remote Jiayuguan Fortress, over 5,000 kilometres from the wall’s easternmost point at Shanhaiguan, on China’s coast.

Jiayuguan lies in the famed Hexi Corridor, for centuries one of the only ways through the mountains to allow for trade with Central Asia, the Middle East and Europe to take place. The area became crucial to the development of the great Silk Road, with goods and people funnelling up the narrow route – at points it tapers to bottlenecks as little as 16 kilometres wide. The arid area, with its lack of sustainable agriculture, has long been a better place to travel through than to inhabit.

Nowadays, while the great caravans of the Silk Road may no longer risk the arduous desert journey, it is the historic sites along the Hexi Corridor that attract most of the province’s tourists. 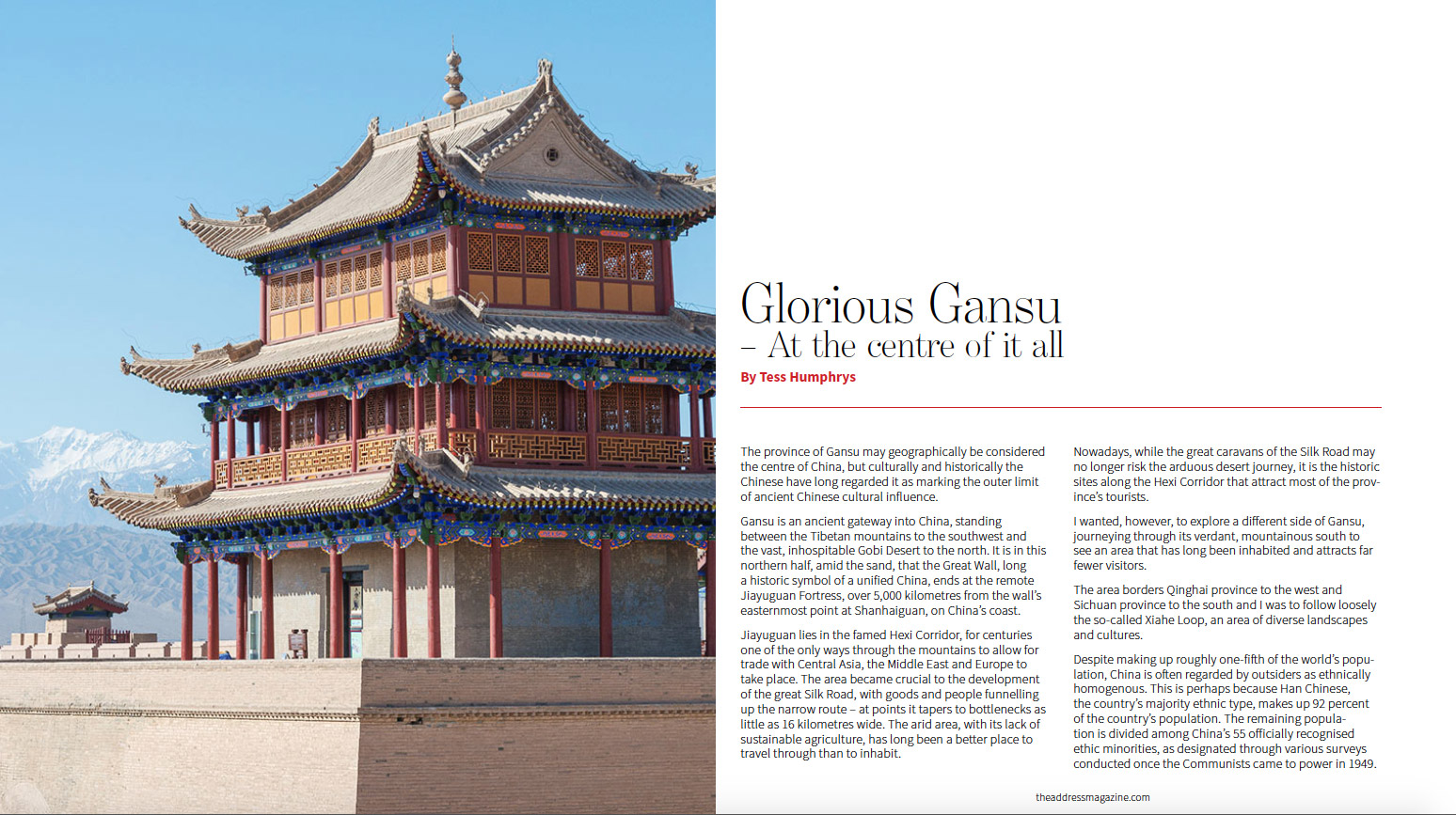 I wanted, however, to explore a different side of Gansu, journeying through its verdant, mountainous south to see an area that has long been inhabited and attracts far fewer visitors.

The area borders Qinghai province to the west and Sichuan province to the south and I was to follow loosely the so-called Xiahe Loop, an area of diverse landscapes and cultures.

Despite making up roughly one-fifth of the world’s population, China is often regarded by outsiders as ethnically homogenous. This is perhaps because Han Chinese, the country’s majority ethnic type, makes up 92 percent of the country’s population. The remaining population is divided among China’s 55 officially recognised ethnic minorities, as designated through various surveys conducted once the Communists came to power in 1949.

For a country that is officially secular, it is interesting that two of China’s biggest ethnic minorities, the Hui and the Tibetans, are followers of Islam and Buddhism respectively. My Gansu journey would travel through an area that has traditionally been home to both these groups, my route passing through a zone of cultural overlap between ancient Muslim and Buddhist communities.

Starting from gritty Lanzhou, Gansu’s industrial capital, my journey takes me through lands made fertile by the Yellow River, which ploughs its way through this part of Gansu. Known as the mother river of China, her sludgy, silt-rich waters regularly flood the surrounding land, making it perfect for farming. Where she flows she creates pockets of greenery, a welcome relief amongst the dry peaks that cover most of the province.

The first stage of my journey brings me to the enormous Liujiaxia Reservoir, formed by a dam on the Yellow River. It is here, carved into a gorge southwest of the reservoir that you can see one of the earliest significant Buddhist monuments in China – the Bingling Si grottoes.

As well as goods, the Silk Road carried new ideas in art and religion

As well as goods, the Silk Road carried new ideas in art and religion, with Buddhism, which arrived in China in the first century AD, by far the most influential force. Inspired by practices in India, early Buddhists to China created cave shrines in which to store scriptures and art, and Gansu is home to more than any other region of China, testimony to its importance in the history of early Chinese Buddhism.

Accessible only by boat, and cut into sheer cliff amid spectacular scenery where the Yellow River empties into the reservoir, Bingling Si houses almost 200 grottoes filled with Buddhist sculpture. The earliest sculptures date back to 420 AD, carved by audacious craftsmen who dangled on ropes off the cliff face to create their masterpieces. The complex was enlarged gradually over more than a millennium and the centrepiece is a huge 27-metre-high seated Buddha, who has sat staring benevolently out across the river since 803 AD.

Nowadays, thanks to its remote location, it remains one of the best-preserved examples of Buddhist cave art in the country, an awe-inspiring tribute to China’s most enduring religion.

Heart of Islam in central China

The next stop on my journey is the unassuming town of Linxia. After leaving the plains of the Yellow River, the route takes me through barren, jagged mountains, their bright red soil contrasting with the grey of a sky heavy with rain. For almost 20km, we race along the edge of the Liujiaxia Reservoir, before crossing Gansu’s highest bridge and heading south to Linxia.

Islam has a long history in China, its philosophical concepts spreading into the country along the Silk Road during the Tang and Song Dynasties (618-1279). Nowadays, there are over 21 million people practising Islamic faiths in China, more than in the whole of the European Union.

Linxia is not a pretty town and indeed barely on most people’s itinerary in the area. It has, nevertheless, played an important role in the development of Islam in China. Sometimes referred to as the ‘Little Mecca of China’, Linxia is at the centre of China’s Muslim heartland, which spans from Qinghai across Gansu and into Ningxia province to the east. The largest concentrations of China’s Hui communities, China’s largest Muslim group, are located in this region.

What is fascinating about Linxia is its wide mix of people practising different faiths and speaking different languages – Tibetan monks, Chinese-speaking Hui and Han people, Turkic-speaking Salar Muslims, and Mongol-speaking Santa and Bao’an Muslims. People are distinguished by their differing headwear, an eclectic mix, generalised by skullcaps for the men and headscarves for the women.

There are over 21 million people practising Islamic faiths in China, more than in the whole of the European Union.

Places of worship exist side-by-side too and look remarkably similar – be they Buddhist, Daoist or Muslim, the old construction styles of religious buildings are not unique to each faith, with most surrounded by grey brick walls, adorned with carvings in slightly different patterns.

It is the large modern mosques, however, that really stand out in Linxia – the town and the surrounding area are punctuated with minarets. Along the valley stretching southwest out of Linxia, the metallic domes of mosques glint golden against the valley landscape, their tips bearing the star and moon symbol associated across the world with Islam. Were it not for the use of Chinese characters on the road signs, you could forget you were even in the Middle Kingdom.

Entering the land of the nomads

From Linxia, Gansu’s landscape begins to change and with it the lifestyles and cultures of the people.
Lying on the northeast fringe of the Tibetan Plateau, where the land begins to rise towards the great Himalayas, the Gannan Tibetan Autonomous Prefecture is home people who are ethnically and culturally Tibetan, even though it lies more than 2,000 kilometres northeast of Lhasa.

Here, people speak a mix of Tibetic languages and signs bear the distinctive Uchen script of Tibetan, alongside the ubiquitous Chinese characters. People’s clothes change too, with many dressed in traditional long robes and scarves, carrying prayer beads that they use to count the mantras they seemingly constantly recite. The whispered rhythmic chanting becomes a soundtrack to my time in the area.

This high-altitude, mountainous region is punctuated by vast areas of grasslands that have been inhabited for centuries by nomadic yak herders. Almost religious in its devotion, theirs is a life dictated entirely by the needs of their yaks and the seasonal changes of the grasslands that support them.

Their spring, summer and autumn days are spent looking after the yaks, ensuring they fatten sufficiently to survive the fierce winters, and protecting them from wolves and other predators. During this time, they move every 40 or 50 days, before settling in special winter grasslands after the first snows fall in October. They remain here until spring returns in May.

In their black, yak-hair tents, dotted on the sparse, green hillsides, families live entirely surrounded by yaks, their noises and their smells. They eat yak-milk yoghurt, dried yak meat, and tsampa, barley flour mixed with yak butter and cheese, and burn yak dung in their stove, the only source of heat. They make blankets from yak hair, use them to carry their belongings, and sell or trade them for needed supplies.

I spend some time living with a nomadic family, getting to know them and helping where I can. I learn how to dry and collect yak dung, attempt to herd the yaks home in the evening and watch the women of the camp milk the yaks as the sun rises over the mountains.

I am struck by their modest life of routine, nurturing their animals surrounded by the awesome beauty of the grasslands and mountains. Still, theirs is an extremely hard life and one that is in danger of dying out, as education and economic opportunities draw them into the cities. I leave feeling lucky to have experienced this traditional way of life.

The last stop on my journey around Gansu is to visit the most important Tibetan monastery town outside of Tibet itself, the tiny, rural town of Xiahe.

Tucked away in the remote hills, Xiahe is home to the Labrang Monastery, one of the major centres of the Yellow Hat sect of Tibetan Buddhism. Founded in 1709 and with more than 1,500 monks in residence, it is the oldest and largest monastery left on the Tibetan Plateau. 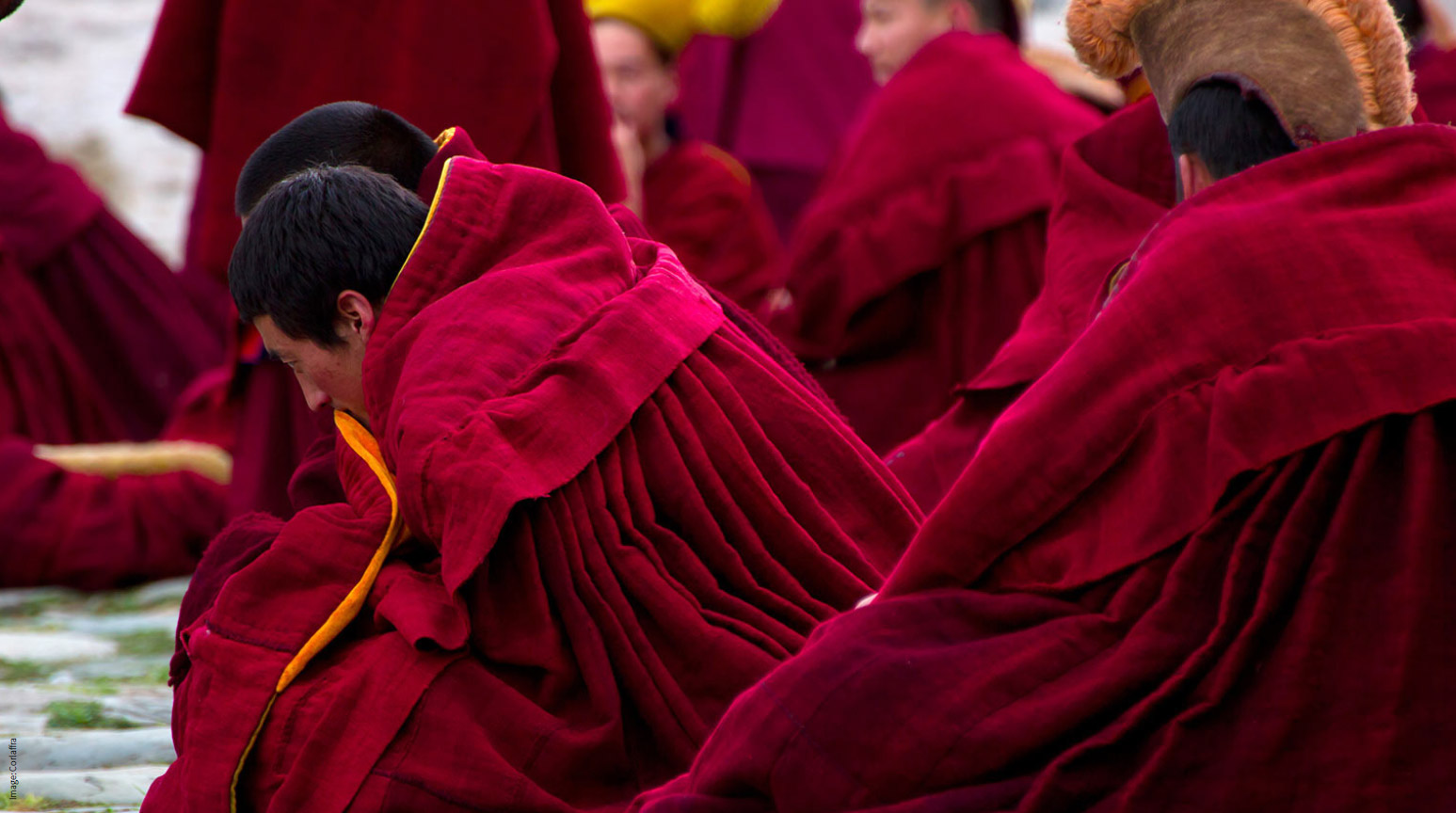 The massive monastery is almost a town within a town, stretching across the entire northern side of Xiahe, flanked by high mountains. Within its mud-coloured walls, it is a working monastery, with monks adorned in pink and maroon robes wandering through the dusty alleyways, and in and out of temples. Here, they live a life of steadfast study and prayer, and at dusk, the hillsides reverberate with the guttural sound of sutras being chanted behind wooden doors.

Every day the town’s population is swollen by hundreds of pilgrims from across the region, who come to complete the three-kilometre ‘kora’, or circumnavigation, of the monastery, spinning the brightly coloured prayer wheels that line the outside walls. The high-pitched squeaking of these wooden wheels is almost the only sound emitted by the determined masses, as they march steadily in line. While most do the kora on foot, some pilgrims equip themselves with mittens and kneepads, and prostrate themselves in front of each prayer wheel before rising, praying, and moving onto the next. Watching their slow, and surely painful, progress is a remarkable insight into their devotion.

Labrang is a glimpse of religion’s enduring significance in China and its role in the lives of its modern-day citizens, making it the perfect end-point for a journey that began at one of Buddhism’s oldest monuments, before continuing through the heartland of Chinese Islam. And although I have only covered but a tiny part of Gansu, in middle of the vast expanse that is the Middle Kingdom, I have experienced life in an area that is at the very heart of multicultural China. 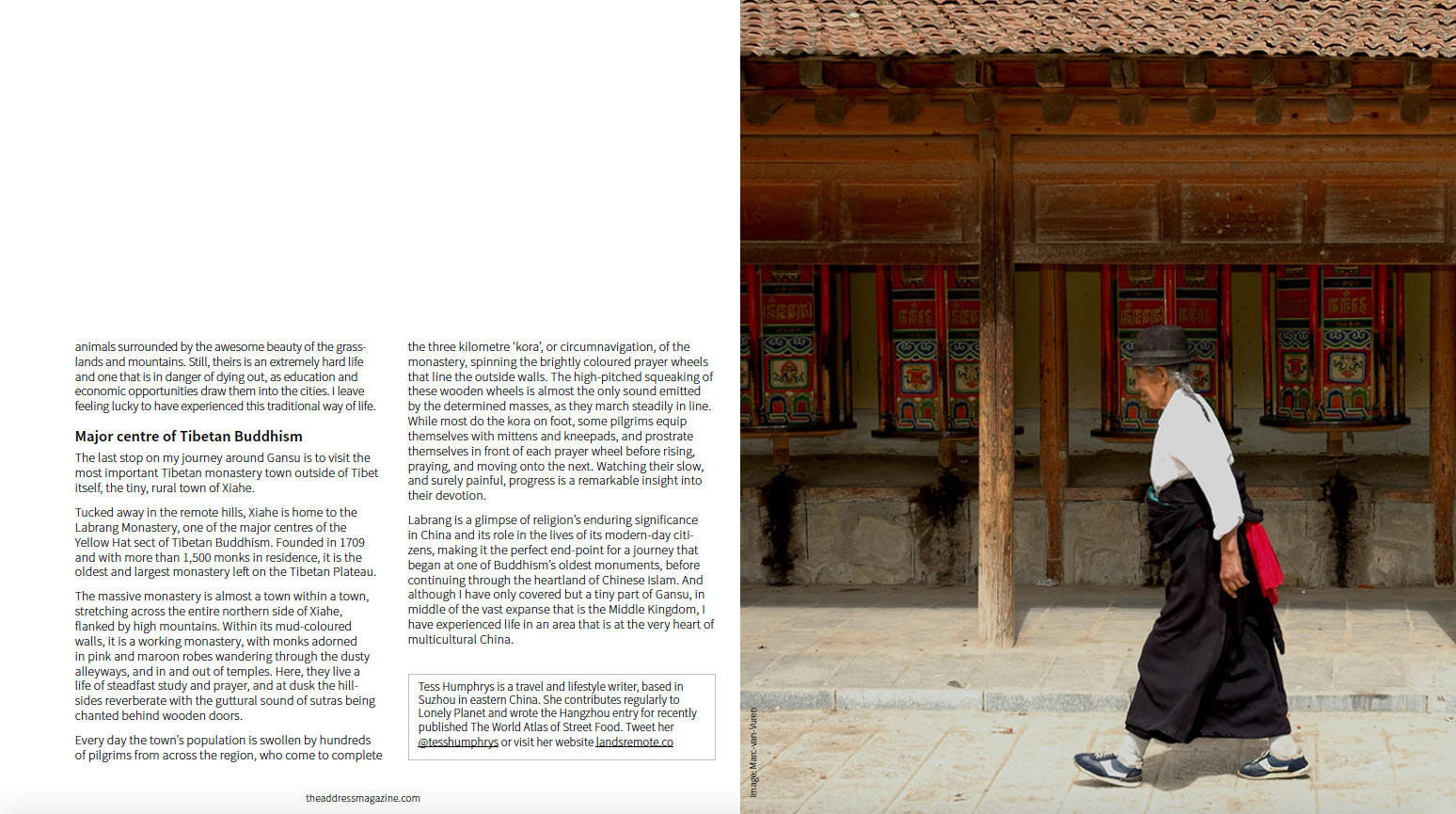