Everyone loves dumplings. In fact, it’s hard to find a culture that doesn’t have a dumpling recipe in its cuisine. I wrote about a world of dumplings delights for Scoot in-flight magazine.

From Chinese xiaolongbao to German kartoffelknödel, these palatable dumplings found around our network are the only cheap and comforting fix you’ll ever need.

Tang yuan are sweet rice dumplings that are traditionally eaten during important Chinese festivals as their rounded shapes symbolise family unity in Chinese culture. A beloved dessert option, tang yuan is commonly stuffed with black sesame or peanut filling. These glutinous white wonders are also served with an accompanying soup that is flavoured with rock sugar and ginger.

Kimchi mandu, as the name suggests, is a type of Korean dumpling crafted with kimchi and pickled cabbage as main fillings. The best kimchi mandu use fully fermented kimchi for the spicy kick that this dumpling is famous for. The dumplings can be steamed, boiled, pan-fried, or deep-fried. Mandu were once part of Korean royal court cuisine, but are now found in supermarkets, restaurants, and snack places throughout the country, making them the perfect on-the-go snack! 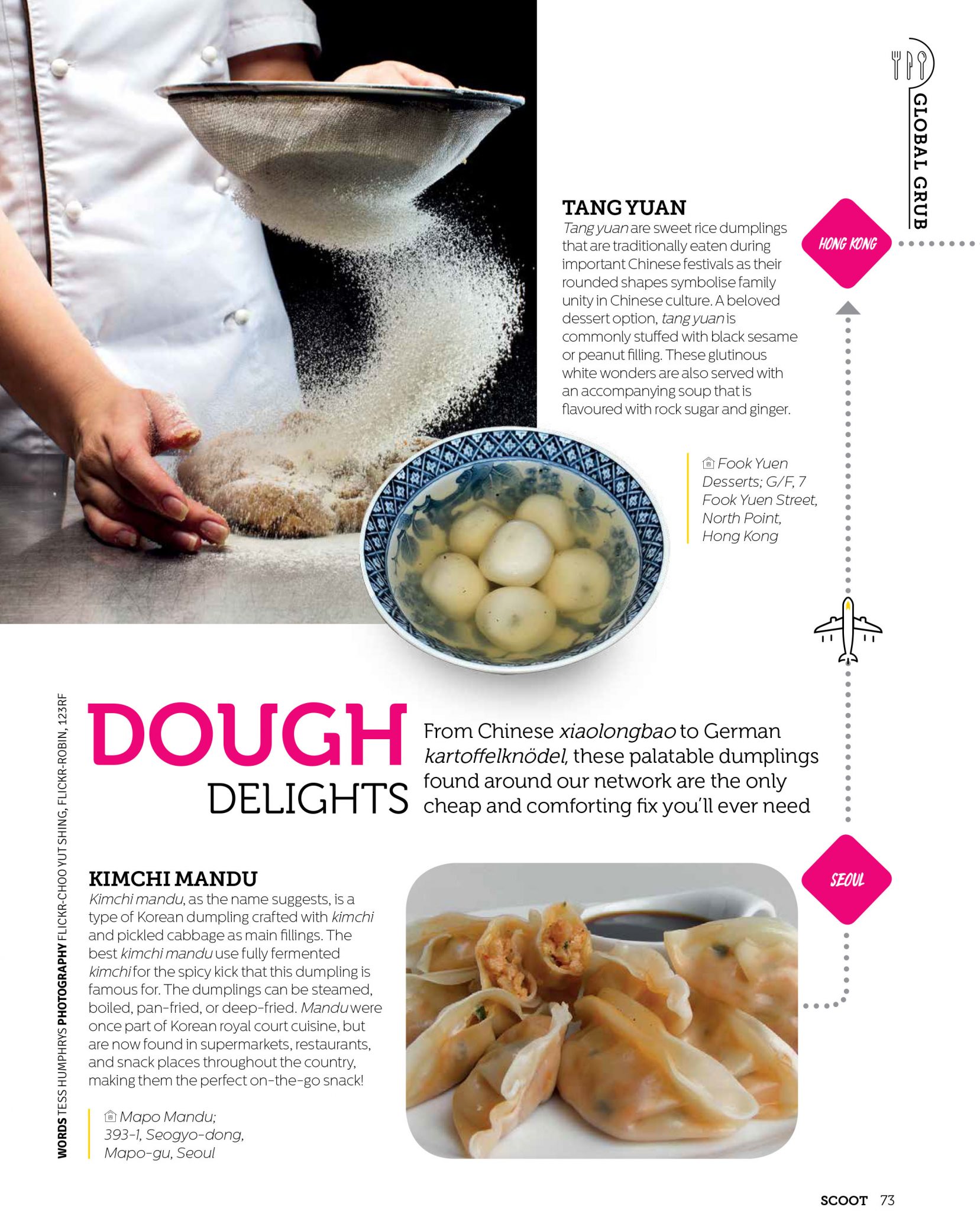 Dumpling aficionados might regard the dim sim as the inauthentic westernised version of Chinese dumplings but if they’re as tasty as their Asian cousins, who are we to entirely cancel out these “dimmies”? Typically found at quintessential fish and chips shops, dim sim can be enjoyed steamed, deep-fried, or barbecued. These Aussie dumplings are filled with meat or fish, sometimes with cabbage – a nod to the original Chinese version.

Traditionally prepared and served in bamboo steamers, xiaolongbao is typically filled with minced pork or crab meat. These delicate steamed dumplings are also loaded with a burst of tasty broth that keeps the meat inside moist and flavoursome. Thus, xiaolongbao is considered to be a sort of “soup dumpling” because of the abundance of hearty stock packed into each tiny bun.

Viewed as a light meal option, siomay is made up of either mackerel meat or other seafood such as tuna and prawn. You’ll easily find these steamed fish dumplings in open-air hawker centres all around Indonesia, although the ones in Jakarta are among the most well-known. Other variations of siomay come with vegetables and are smothered in peanut, sweet soy, and chilli sauces. For extra taste, simply add a squeeze of lime juice.

Potato fans are in for a gastronomic treat with kartoffelknödel, a type of dumpling that combines raw and cooked potato in one dish. Popular across Germany, these steamed potato dumplings are accompanied with roasted or braised meats and a generous serving of gravy. Some kartoffelknödel are stuffed with plums or apricots and then glazed with melted butter and brown sugar for a sweet twist. 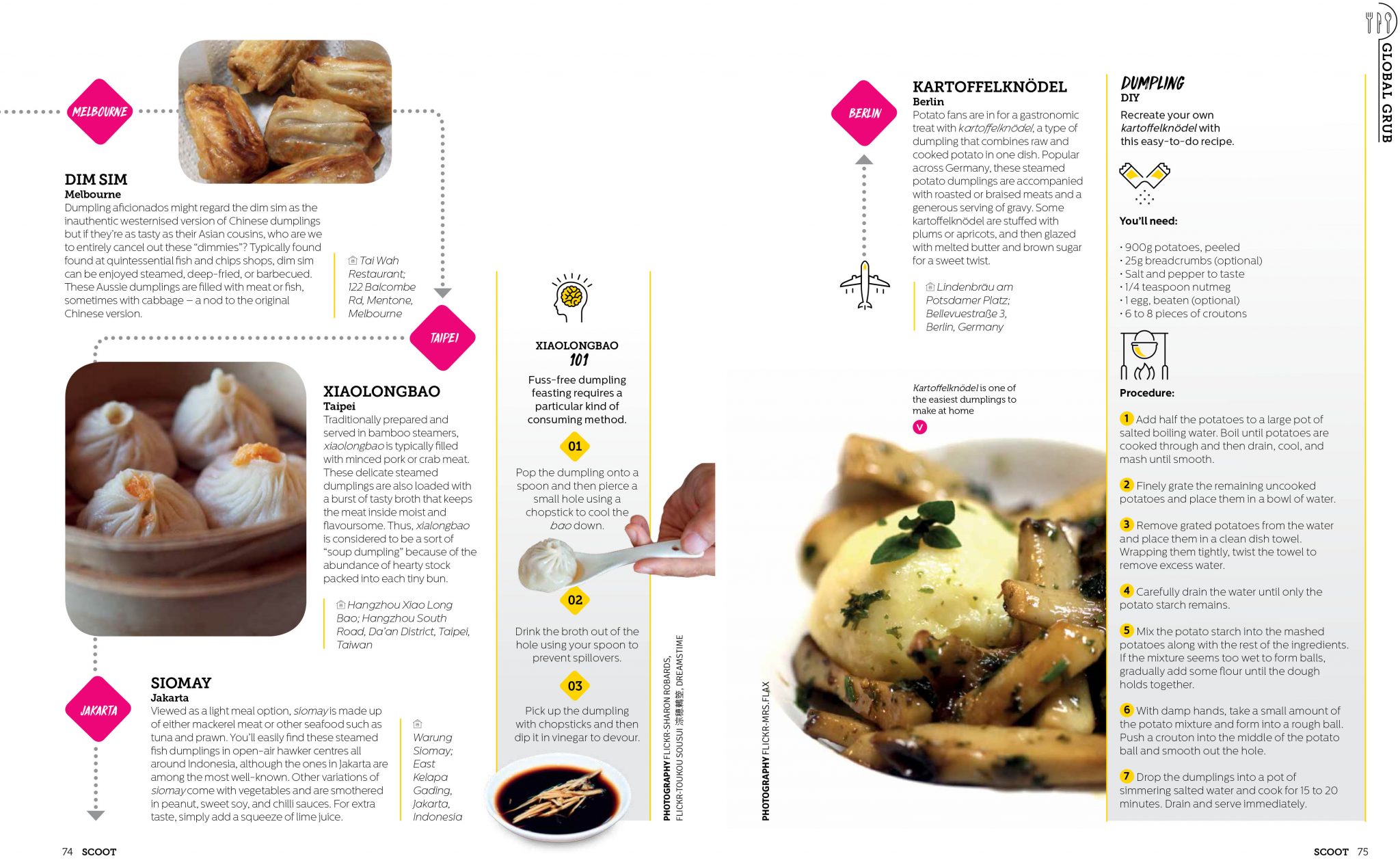