Nanjing is one of my very favourite cities in China and, unfortunately, a place that many people simply don’t bother visiting. I wrote this article for Jumeirah Magazine about why you should give Nanjing a chance.

Nanjing is one of China’s most historically important cities. While many travellers to China merely pass through, or don’t visit at all, Nanjing’s abundance of historical sites, contrasted against a modern city that it continually developing and looking forward, makes it well worth a few days’ visit.

Over thousands of years, Nanjing, the stately capital of China’s eastern province of Jiangsu, has witnessed events that have shaped modern China and influenced how the Chinese see themselves.

Nanjing’s name literally means ‘Southern Capital’ and the city, formerly called Nanking in the west, has served as the capital for various Chinese dynasties, kingdoms and republican governments.

Thanks to its position on the banks of the Yangtze River, which allowed for trade and easy travel, Nanjing has been important since the earliest of times – there is evidence of an impressive walled city dating from 600 BC.

In 1368 the first emperor of the Chinese Ming imperial dynasty established the city as the capital of all China, a title it would hold for almost 300 years. While the Qing dynasty subsequently shifted the capital to Beijing it was in Nanjing that the Treaty of Nanking was signed. The 1842 treaty, which relinquished Hong Kong to the British, caused national embarrassment and significantly weakened the Qing emperors. In 1912, following the overthrow of the Qing emperors, Nanjing briefly became the provisional capital of the new Republic of China, with Sun Yatsen as its first president.

In 1937, violence defined the city when invading Japanese soldiers murdered an estimated 300,000 civilians. The sitting Kuomintang government fled the Japanese advance, although after Japan’s surrender, and the government’s subsequent return, Nanjing capital status was briefly reinstated. After four years of civil war, however, in 1949 the Communists chose to abandon Nanjing as capital and moved to Beijing to establish the People’s Republic of China’s first government.

But it’s not all about looking back. As with most major Chinese cities, Nanjing has its eye firmly on the future, developing its infrastructure and economy at a wild pace, creating an affluent, modern metropolis that’s easy to navigate despite its huge size.

Memorial Hall of the Nanjing Massacre

This sombre museum stands not only as a tribute to the victims of the Japanese occupation of the city, but also a chilling reminder of the evils of war. Much of the museum is built from black and white granite, its starkly modern exterior intentionally presenting a melancholy, austere appearance. Pay your respects to the victims here and better understand a traumatic event that has left such a mark on the city.

Get fit by climbing the 392 stairs to this colossal mausoleum that venerates the man most people see as the founder of republican China. While there’s not much to see in the vault at the top, apart from a statue of the man himself, on clear days the views of Nanjing are unparalleled. The surrounding parkland, which spreads out around the foot of Purple Mountain, offers shaded walking trails for further outdoor activity.

Many of Nanjing’s places of interest are enclosed within impressive Ming dynasty city walls that snake around the downtown area. The walls are reputedly the longest and oldest circular defensive fortifications in the world and were once more than 60km long. Nowadays, around 25km remain and some sections can be explored on foot or even two wheels – hire a bicycle and navigate the nine-metre-wide flat top that allows more than enough room for cycling.

Visit the shops around the Fuzi Miao, also known as the Confucius Temple, to pick up goods traditional to Nanjing such as brocade, satin and polished stones. You’ll also find fun and kitsch souvenirs to take home, as well as a host of Chinese street food. Try the giant dumplings filled with soup, which are famous to the city and require a straw to suck out the delicious pork broth inside!

Nanjing is a major university town and as such its nightlife has a youthful and fun vibe. Hit the Shanghai Road area, which is close to two of Nanjing’s biggest universities, for a host of lively bars that cater to both local students and the expat community. Sample a bottle of local craft beer brewed in the city by Master Gao, one of China’s first craft beer breweries.

A must-visit for chocolate lovers, Chocolatini in Jumeirah Nanjing is a unique addition to Nanjing’s dining scene. Treat yourself to a variety of seasonal handmade chocolates and decadent patisseries, crafted by an expert chocolatier, while enjoying the views from the 41st floor. A creative menu of martinis, made using the best ingredients and latest techniques, adds another dimension to the offering.

When you need to take a break from touring Nanjing’s many historical sites, book yourself into the modern and contemporary surroundings of Jumeirah Nanjing. Indulge in the inviting spa facilities and sky atrium pool that provide an ideal retreat from the vibrant city. With its striking and iconic architecture, created by the legendary architect Zaha Hadid, Jumeirah Nanjing captures the city’s unique blend of traditional and cosmopolitan style.

For those who like their bookstores hip, Librairie Avant-Garde is one of the country’s coolest, housed in a converted underground parking lot. Come here to browse the huge selection of books, mail postcards home to friends and family, and enjoy a coffee at the store’s on-site café. The store is also at the heart of Nanjing’s cultural scene, playing host to a variety of talks, concerts and exhibitions. 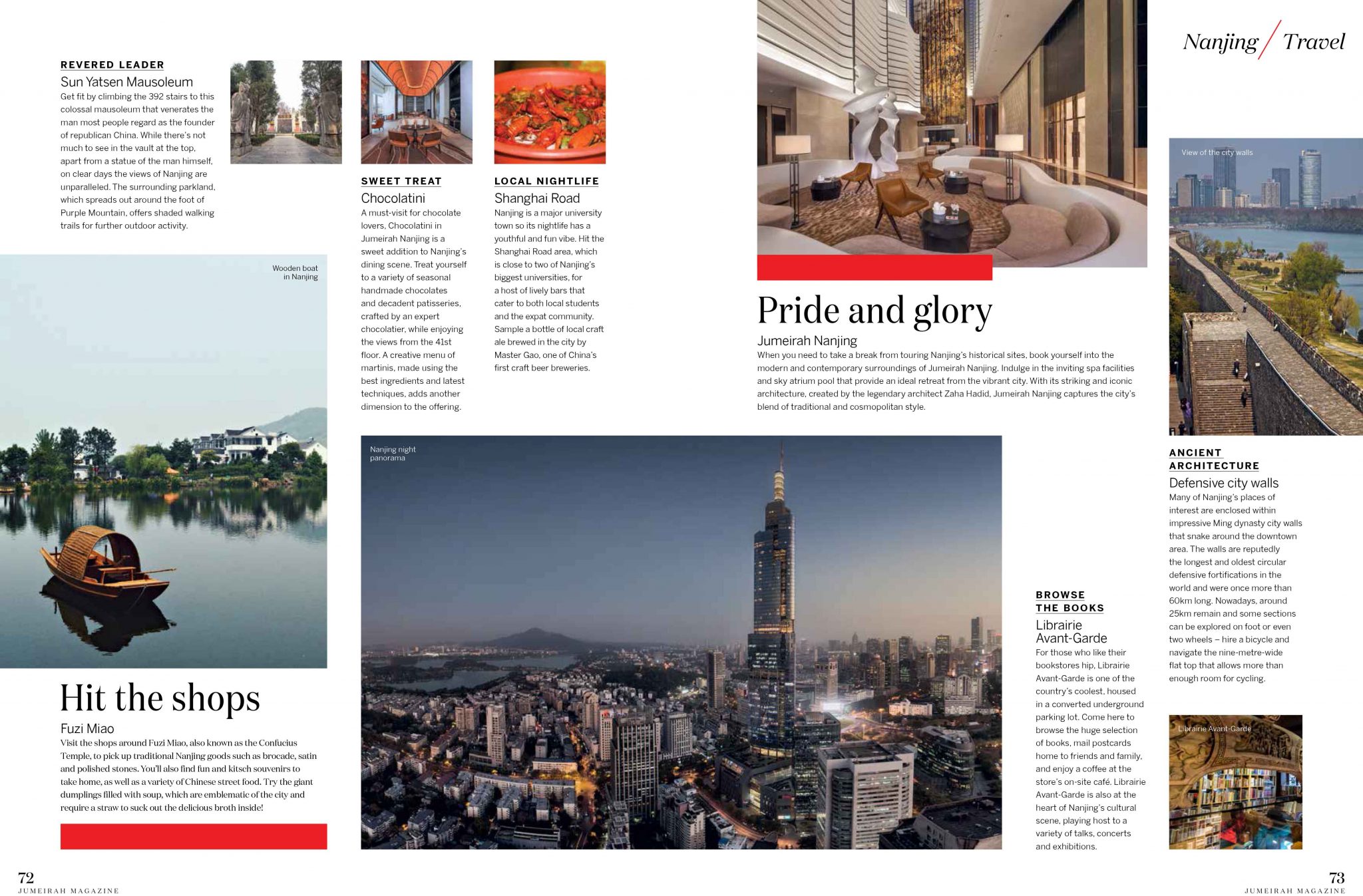 No comments yet
China Jiangsu Nanjing